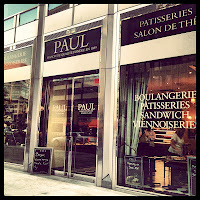 MONDAY JUNE 4th
The downtown incarnation of Paul Bakery at 1000 Connecticut Avenue NW is officially open! If you were not an early riser this morning and missed out on the free flutes or macarons promotion for the first 1000 people who walked through the door, you can still check out the new location and grab one of their new menu items, like one of the sandwiches made on basil bread. My favourite new item on Paul’s menu is actually the grapefruit-mint salad. It’s so simple yet so refreshing, perfect for these hot and humid D.C. summer days! I’ve also just discovered the pain au chocolat aux amandes which can only be described as the love child between two amazing pastries: pain au chocolat + croissant aux amandes. It’s a pretty decadent treat!
TUESDAY JUNE 5th
Every Tuesday in June, Belga Cafe’s signature mussel pots are all $15.95. Just saying… Tonight, Ripple is also celebrating its second anniversary by launching a grilled cheese bar at Ripple. Starting June 5, the Cleveland Park establishment will offer warm toasted sandwich, made to order with one of 15 artisanal cheeses from around the world and various breads, meats etc. Or you can grab one of Ripple’s original creations. The Stinky Pete with epoisse, asparagus and anchovy has my name written all over it…
WEDNESDAY JUNE 6th
One of my favourite spot to indulge in my macarons craving, The Sweet Lobby, is celebrating its one year anniversary! To say thank you, they’re hosting a week of giveaways, with a different specialty item given out every day this week. And today is cupcake day! (Friday is macaron FYI) Check out their facebook page for more information about their anniversary cards and the giveaways.

THURSDAY JUNE 7th
The third edition of Interns Rock starts tomorrow so if you have interns in your office, show your appreciation for their hard work and make sure they sign up to receive discounts at participating restaurants, museums, music venues etc. Interns can pre-register online then pick up their key-tag at The Washington Center‘s two locations: their headquarters at 1333 16th Street NW or the Residential and Academic Facility at 1005 3rd Street NE. Once they’re all signed up, send them to Sign of the Whale for a pre-Interns Rock Intern Party. The free nacho and taco bar starts at 6PM…

FRIDAY JUNE 8th
Truckeroo is a monthly food truck festival held at the DC Fairgrounds (corner of Half St.and M St., SE.) Admission is free and there’s over 20 different food trucks signed up already… But really the big event today is the start of the UEFA Euro 2012 (Allez les Bleus!!!). I’ll have a post with a list of places to watch the games up in a few days.


SATURDAY JUNE 9th
Two years ago almost to this day, Biergarten Haus opened its door on H street NW, just on time for the World Cup. Well, it’s soccer time again! The games today are Denmark-Holland (noon) and Germany-Portugal (2:45PM.)  I mean, a German beer garden is a pretty great place to be if you’re going to be cheering for Die Mannschaft… the Goethe Institut is another good spot… they are showing all of the Germany games.


SUNDAY JUNE 10th
After hating on Italy all afternoon (the Azzurri are facing Spain at noon, and not only do I love the Spanish soccer team, but Spain, but I loathe the Italian football team) I may need a little zen time at Yoga in the Park at Meridien Hill Park. Bring your own mat at 5PM and join me 😉

Retweet on TwitterLaetitia-Laure B. 🚀 Retweeted
18h

Not a Wordle. Just James Webb

A friend of mine found this gorgeous cat roaming around her yard. They lured him/her inside, then went to have it checked for a microchip. It was microchiped! His/her owners lived a few street away!! But they never came to pick the cat up. I hate people sometimes :(

This is wild... two of 2022's most eagerly anticipated cookbook releases have been lost at sea...
https://www.washingtonpost.com/food/2022/01/28/cookbooks-delayed-container-ship-sinking/