You are here: Home / Meatless Monday / Some like it hot raw… 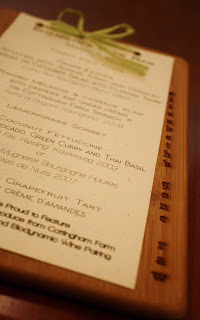 Once the stronghold of steakhouses and burger joints, could Washington be ready for a meat-less, heat-free dining experience? If the success of Elizabeth’s Gone Raw is any indication, it would appear so… Launched last July by Elizabeth Petty, owner of The Catering Company of Washington, this new occasional restaurant aims to challenge the palates of Washingtonians while demonstrating that food can be both healthy and flavourful, uncooked and surprising. Elizabeth, who herself went raw in 2009 for health reasons, and her chefs Thomas Berry and Calvin Lee, are now providing DC with its first high end raw and vegan tasting menu. I had the opportunity to taste my  first entirely raw vegan meal yesterday at Elizabeth’s catering headquarters, an elegant townhouse located at 1341 L Street, NW. I came to the lunch with a series of expectations, not least among them that the meal wouldn’t be as satisfying as a traditional “cooked” and non-vegan meal. I was wrong. 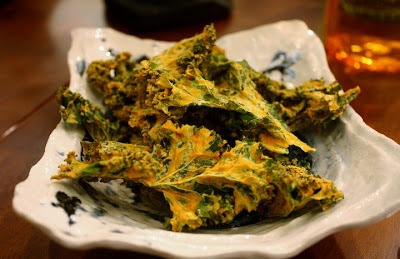 Heat may be missing from the kitchen but it wasn’t lacking in those Kale Chips which opened the tasting on a uniquely spicy and crunchy note. Apparently, they have developed quite a bit of a following… 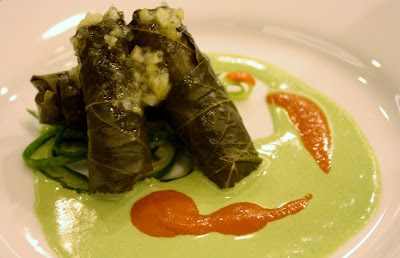 The first course challenged my memories of mushy grape leaves. Here they are, extremely crispy, stuffed with jicama, mint and parsley and served on a cucumber salad with cilantro tahini. 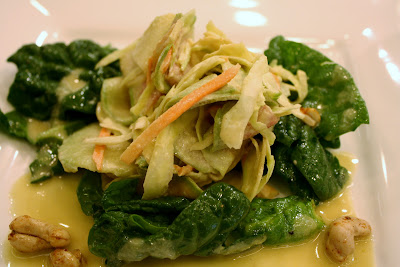 The ginger cream dressing was definitely the high point of the third course for me. In this age of chomping down food as quickly as you can to move on to whatever you need to be doing next, I found myself spending more time eating (well, chewing too) my radish melange and cabbage slaw, served with cashews on Cottingham Farm spinach than I would have a “normal” meal. 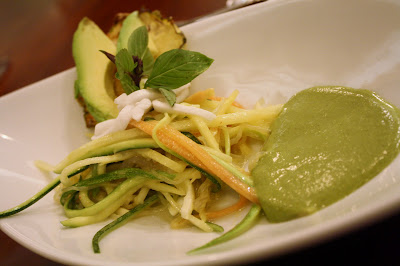 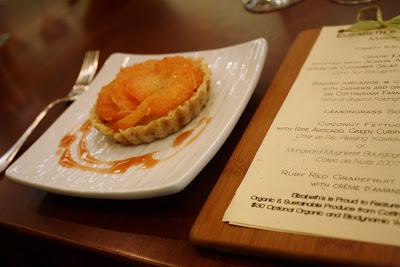 The highlight of the meal, however, came all the way at the end. If I spent more time than usual on each of the previous courses, I devoured the dessert! Shaped like a delicate orange rose, the ruby red grapefruit tart with creme d’amandes was absolutly delightful. The crust, which like everything else had not been heated beyong 105 degree Fahrenheit, was made of pressed macademia nuts, with sea salt vanilla and dates. The cream consisted of cashew and almond flour, honey, almond milk and coconut butter. It was the perfect sweet balance to the tart grapefruit and I could have eaten five more of these tarts. Except, contrary to what I expected at the beginning of the mea, I was so full!
Neo-gastromony recognises the strong connections between us, our plates, our planet and culture. The concept is gaining grounds in the district and Elizabeth’s Gone Raw heat free, meat free fine dining experience fits perfectly within it. Spending more time chewing your food, enjoying its fascinating textures, gives a leisurely pace to your meal, a nice break from the typical fast food and fast life we are accustomed to. If you would like to try this unique culinary experience, Elizabeth’s Gone Raw is now hosting weekly 5 course, prix fixe dinners. You may still be able to get a spot for tonight’s seating (3/11) which features the menu pictured above or for next Saturday’s special event with with Daphne Miller, MD, best selling author of the Jungle Effect. Otherwise, dinners will be held on 3/25, 04/08, 04/15, 04/23 (Saturday) and all Fridays in May.  All dinners with the exception of those featuring guest speakers are $75, with an optional $30 organic and biodynamic wine pairing.