The Ambassador’s receptions are always a success, though I have yet to go to one where they actually serve towers of Ferrero Rocher. Maybe I too should sue the makers of Nutella and Ferrero for wrongful advertisement 😉 With or without Ferrero Rocher, Ambassador Jan Matthysen of Belgium was kind enough to open the doors to his residence to representatives of the French speaking diplomatic and cultural communities last night as he officially kicked off DC’s Francophonie Festival. 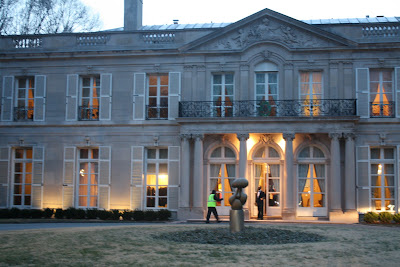 Ambassador Jan Matthysen and Bernard Geenen awarded this year’s “Grand Prix de la Francophonie” to Dr. James Billington, the Librarian of Congress, and the “Prix Spécial de la Francophonie” to Grammy Award winning Benin singer and songwriter Angélique Kidjo. Mrs Kidjo was unfortunately not present to accept her award but Dr. Billington gave a lovely speech, mostly in French, where he spoke of his time doing research in France (and in Minsk, which he called “l’endroit le plus frigide du monde”). Meanwhile, guests munched on cajun-inspired food prepared by Chef Jan van Haute and provided by The Council for the Development of French in Louisiana (CODOFIL), drank white wine provided by the Swiss Embassy, red wine provided by the French Embassy and beer provided, of course, by the Belgian Embassy. 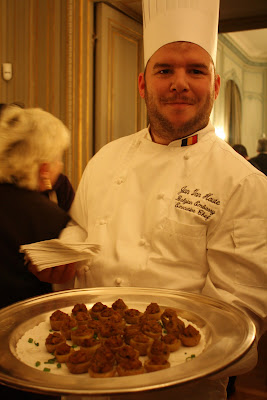 Chef van Haute channeled his inner Cajun for a Louisina inspired menu
Every March, francophones throughout the world celebrate the beautiful language and shared cultural heritage that unites them, whether they live in Montreal, Brussels, Marseille, Kinshasa, Ho Chi Minh City, Moncton, Port Louis or Cassablanca. French speakers in DC are no exception and the 6-week long festival offers a little something for every francophone or francophile, from a panel of French immersion programs to concerts, film screenings and art exhibits. Of particular interest this year are:
For more information and for a complete schedule of events, please visit the DC Francophonie’s website. To view more picture from the Belgian Ambassador’s residence (which is GORGEOUS!), head to my flickr page. Oh, and congratulations to Belgium. You showed that you can be 9 months without a goverment, and still throw a great party. Although next time, please consider some Ferrero Rocher!